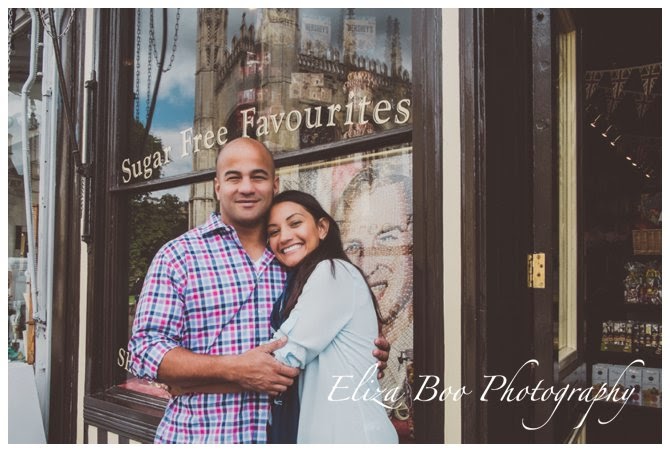 I was delighted to receive an email from Alanna saying she loved my photographs and she really wanted me to take her wedding pictures! It was even more of a surprise to hear that there were barely 3 weeks to go before she planned to fly to England with fiance Joe, to marry near to Cambridge. “We just got engaged” she explained when she telephoned later – “and we thought, we’re going to England for a holiday, why wait”! During a midnight (California – early morning UK) phone call, Alanna loved the suggestion of an engagement shoot in Cambridge – and it was a first for me on a lot of counts – the first time I would meet them, the first time I would shoot an engagement 5 minutes after a consultation, and the first time that would happen just 3 days before the wedding! Alanna sent me photographs, but they absolutely did not do justice to how truly lovely the two of them are – and when I met them, I felt my heart do that skippy skip beat when you just know that they are going to help you to create some stunning photographs!

Alanna & Joe both wanted to make sure that their engagement shoot captured their day in Cambridge – although Joe had been to Cambridge in the past, it was all new for Alanna and of course, was a complete change to San Francisco where the couple live and work. So, we set out to capture as much of ‘England’ as we could – finding traditional telephone boxes, post boxes, ice cream vans, old pubs and old fashioned sweet shops, as well as the soaring and hugely historical buildings that make Cambridge truly unique. 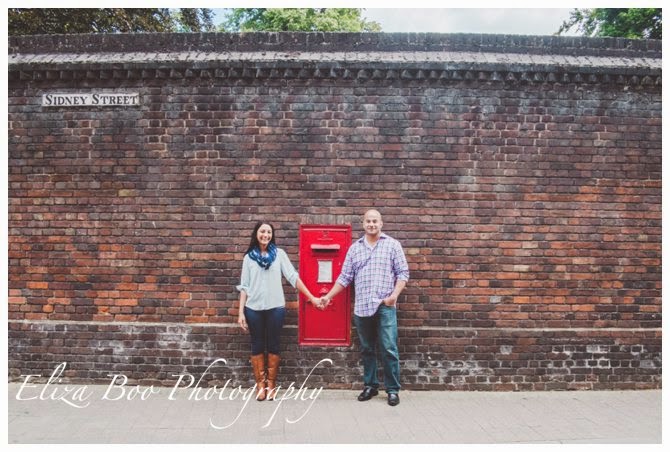 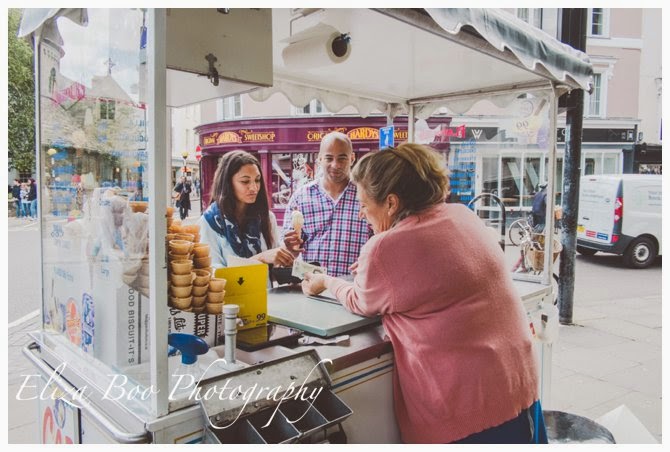 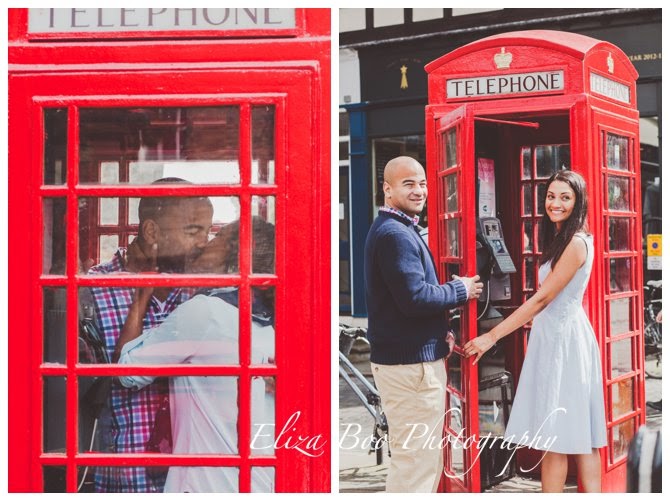 In fact, we walked for miles and miles and miles! 7 in fact, which is a record for an engagement shoot! (I was wearing a fit bit, which measured it all perfectly). I was impressed by the couple’s enthusiasm and energy – especially as they’d both brought over night bags for changes of clothing and because they were going to London immediately afterwards, to meet Alanna’s mother, brother and aunty who were flying in for the wedding 3 days later!

Sadly, Joe was unable to see inside Trinity College, which he had so wanted to go into – the blame for that lies with Jeremy Irons, who was filming there that day! But the Trinity College porters softened the blow by posing with the two of them. 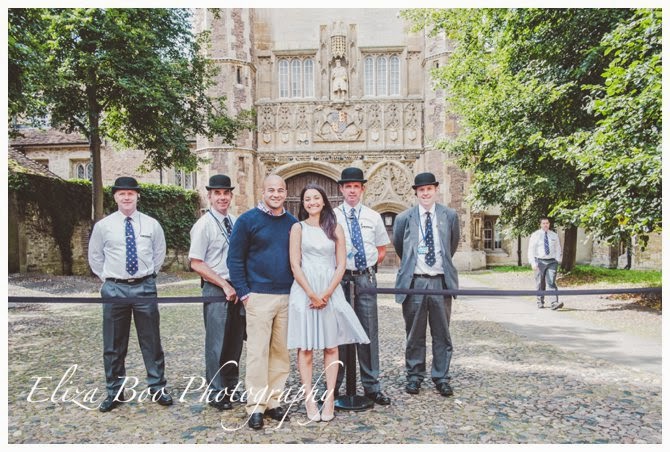 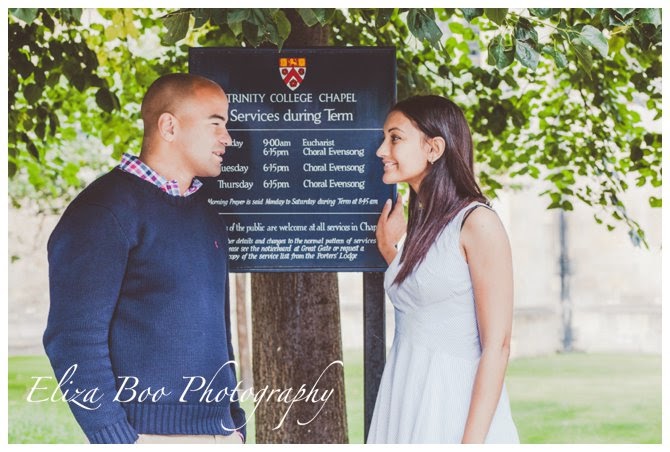 Instead, we enjoyed a lovely walk by the River Cam – taking time to see the punts, the ducks and the bridges! 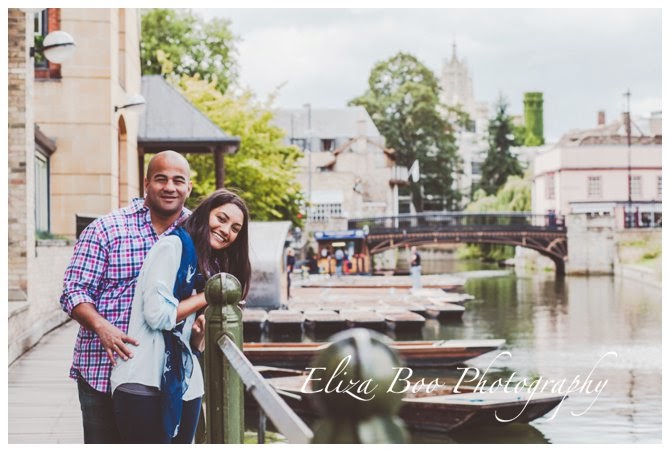 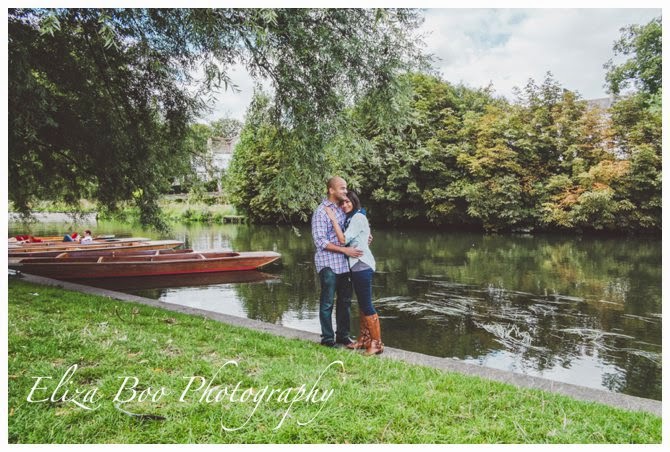 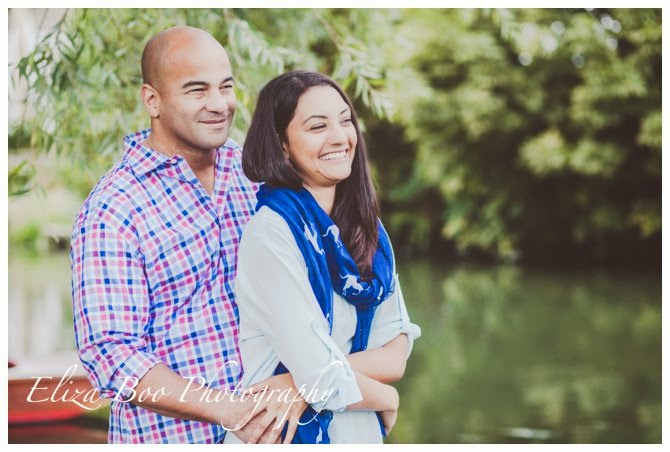 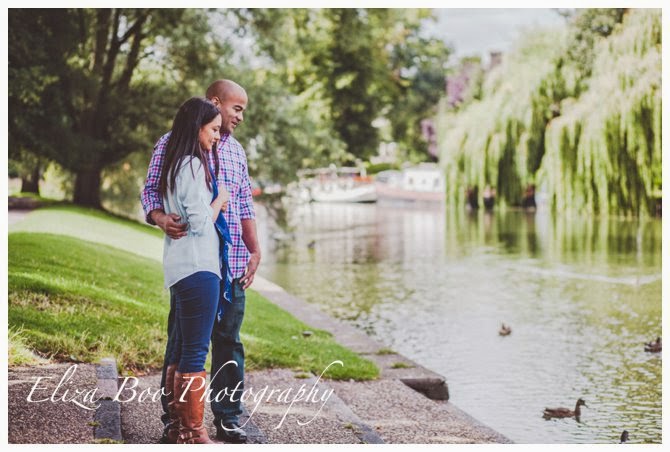 Alanna shares my feeling about birds – that they’re fine when they’re slightly away from you – so these ducks were just perfect. They stayed in the river and provided a point of interest. Little did we know at the time that ducks were to make a reappearance on the wedding day itself!

After enjoying the calm and sunshine of the riverside walk, we headed back into the city centre to visit King’s College and the soaring chapel. It was the first time I had been inside – and my goodness, it is stunning and so impressive. I just couldn’t help wondering how people managed to build such buildings in the days before cranes. 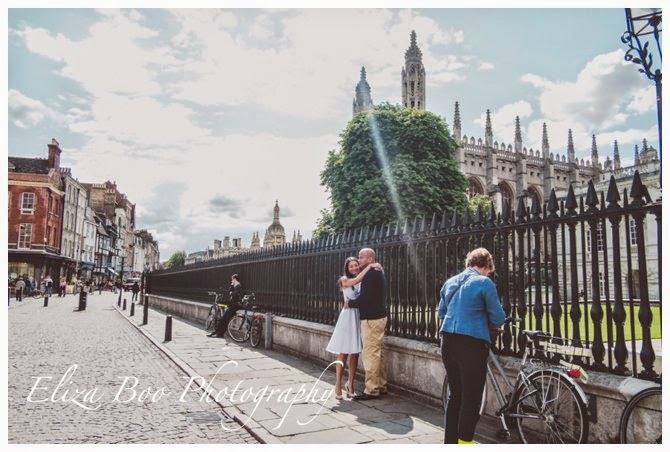 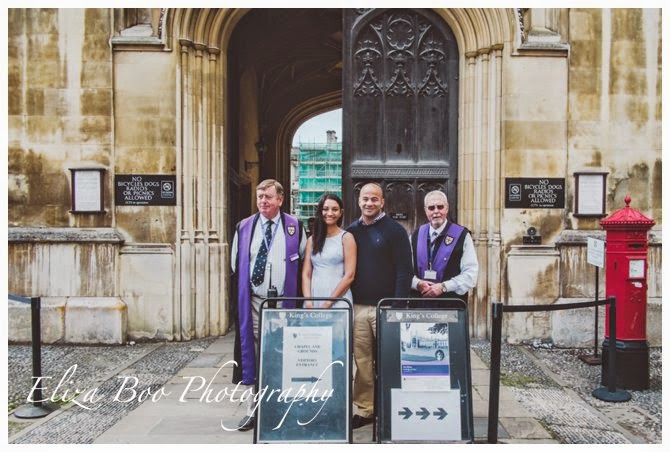 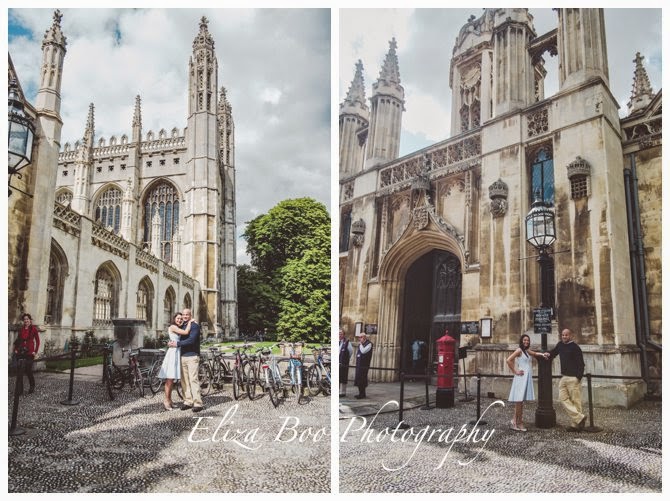 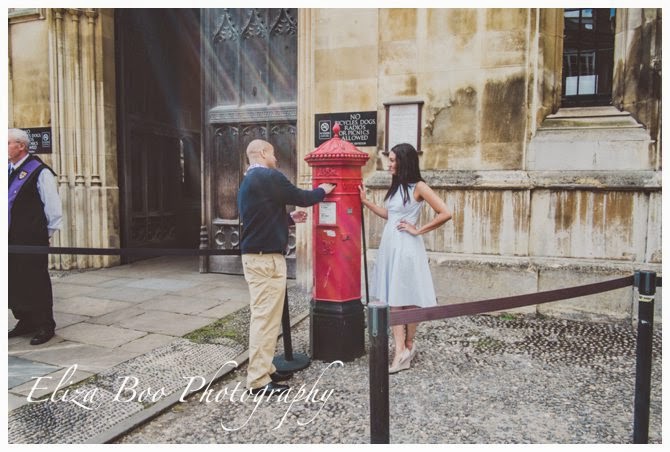 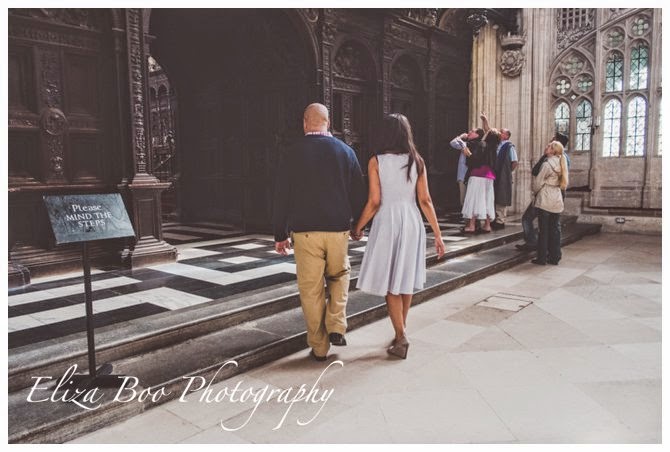 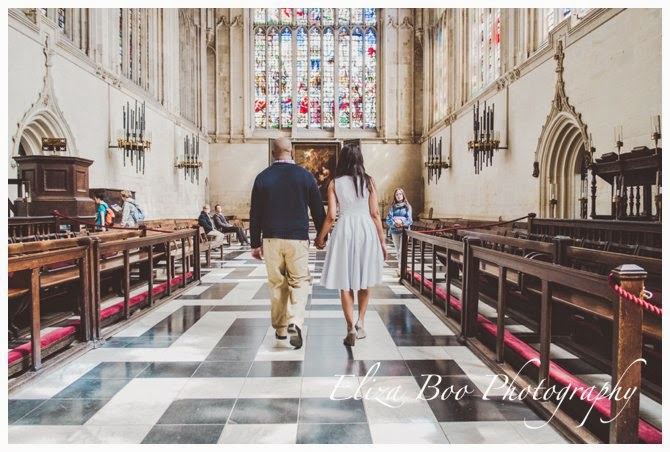 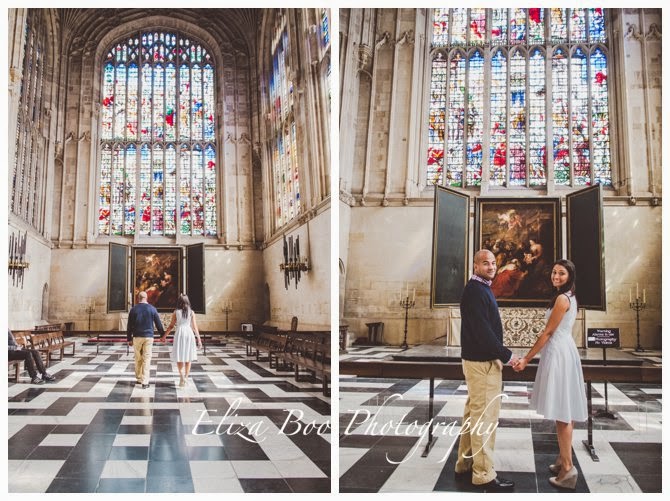 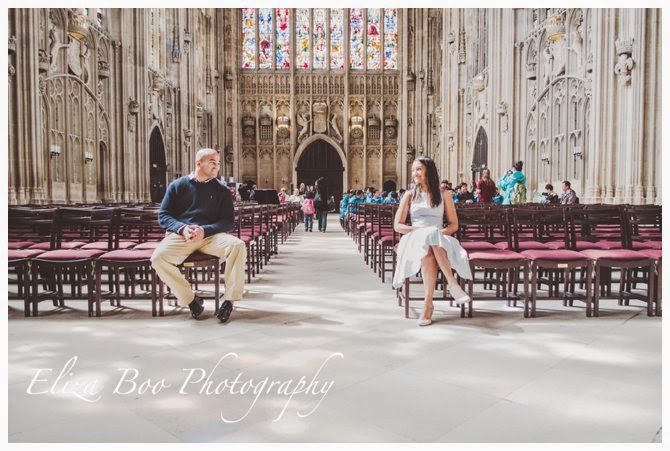 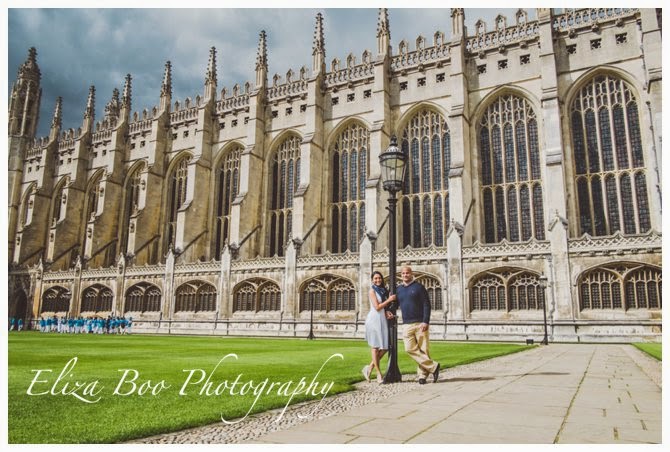 Being in the company of these two lovely people was wonderful, and I so enjoyed it as well as being in Cambridge, that it was hard to remember that this was work!  Huge thanks to Flora who came along to act as ‘bag lady’ – With every photo we could safely step away from suitcases, camera bags and coats, knowing that she was staying put and keeping them out of frame and safe. I’ve included one photo of her, as she too loved the splendour of King’s College Chapel. And many many thanks to Alanna & Joe for taking me on a truly memorable day, and who after hours of walking and posing, remained as gorgeous and friendly and sparkly as when the day had started! 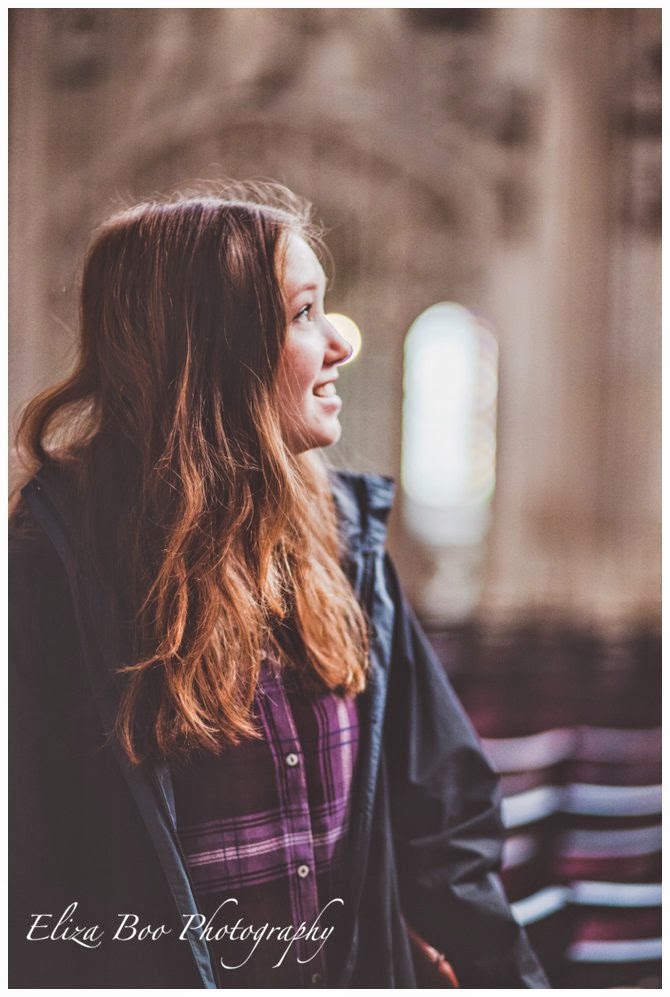 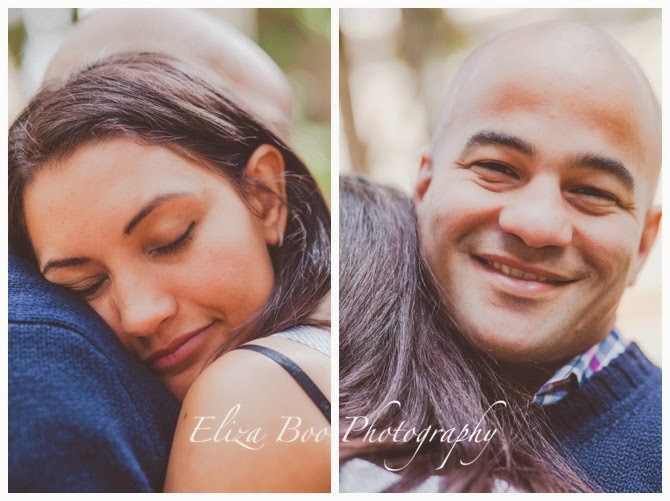 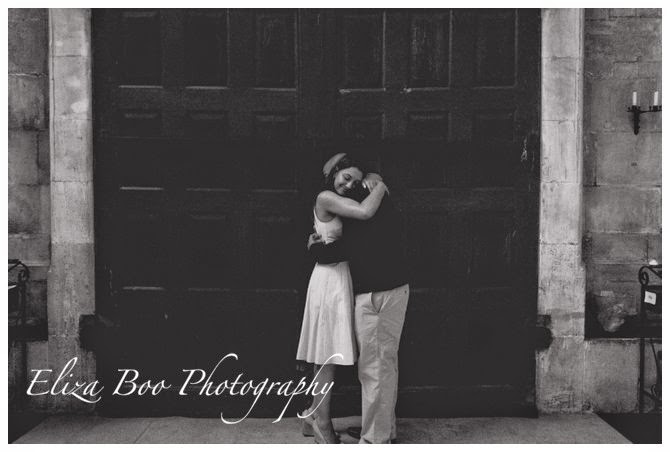 I love to read your comments, and please feel free to share! This is a Sisterhood post, so please click on Isabelle to move to the next blog in our circle!